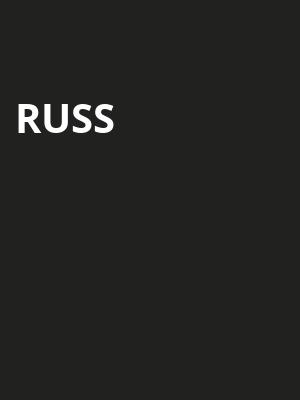 Knowing you're worthy of sitting atop the throne and actually proving it is an exercise in both courage and skill, which rapper Russ has displayed in spades thus far

Not afraid of the graft and the grind, Atlanta-based rapper Russell Vitale, known primarily by the mononym Russ, crafted the beginnings of an exciting career in the 2010s by releasing independent singles and albums, forging a name in the city's underground scene. After establishing his own collective and label Diemon, Russ capitalized on his word of mouth success and released his major-label debut album "There's Really A Wolf" with Colombia Records in 2017. The hip hop pioneer returned with his third studio album, "Shake The Snow Globe", and heads out on tour in 2022!

Despite the seeming overnight success of Russ' swaggering hip hop jams and melodic, hazy R&B ballads, this artist has stayed relevant for nearly over a decade by staying true to his unique vision. The uncompromising rapper sings every hook and raps every bar on each of his tracks, as well as producing, mixing and mastering them. In an age of features, paid promotion and the industry machine, Russ and his rapidly-growing fanbase are a testimony to the power of well-crafted, no-bells-and-whistles music.

Photo: The Come Up Show Used under Creative Commons License

Seen Russ? Loved it? Hated it?

Sound good to you? Share this page on social media and let your friends know about Russ at Arena - Neal S. Blaisdell Center.