Sorry! You missed Rhye at The Republik 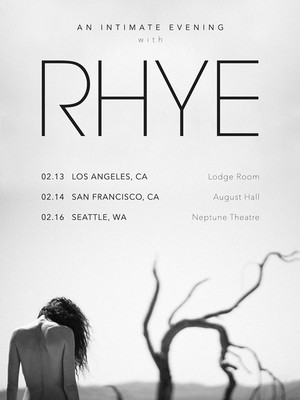 An intimate evening with Rhye

Following the February 2018 release of his second studio album Blood, Rhye's enigmatic frontman Mike Milosh is hitting the road with his new material in tow. After a promising debut in 2013 was mired in major label tussles and the loss of producer Robin Hannibal, Rhye evolved to become a musical collective fearlessly led by Milosh, rising boldly like a phoenix from the ashes with this critically acclaimed sophomore effort.

Calling to mind the dulcet tones of Sade in her prime, Milosh's incredible voice is audio honey, often mistaken for women's vocals. Placing his tracks on many a bedroom playlist, the muso's bittersweet melodies languish over smooth grooves, slow and soulful electronic beats, pulses and synths, lifted by soaring string arrangements and sub bass. Modern mood music at its finest!

Seen Rhye? Loved it? Hated it?

Sound good to you? Share this page on social media and let your friends know about Rhye at The Republik.